This blog is TOTALLY designed by me.

Wadi Amman: Urban Regeneration Proposals
I have found these proposals for the urban generation of Wadi Amman on http://www.urbanexchangelondon.co.uk . The following description was added:

The jabals and wadis of Amman have been the scene of settlement since the Bronze and Iron Ages. The Ammonites made it their Amman, the Romans made their Philadephia. The Seil wadi is a serpentine river bed lying between the steep banks of the valley. Evidence of its past history gives the area a cultural richness to be treasured.

This urban strip stretches between the Roman Theatre and Forum to the Ottoman inspired Hedjaz Railway at the other. Because of intense urban growth and traffic streams, a succession of routes has been established over the years leaving the Strip impenetrable, lifeless and stranded.

Its strategic location and its regeneration potential, has made the Strip an ideal hub of activities.The project is a collection of buildings and public open spaces sitting in the valley landscape whose rhythm is articulated by a series of functional zones. The intention is to bring a sense of vibrancy to the area. Massing creates vistas and enclosures. The space between buildings tempting the user to visit beyond - a glimpse of more to explore. The trace of the Seil is reflected in the architectural composition, building details and the open spaces.

And now a bunch of photos: 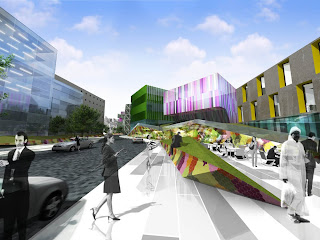 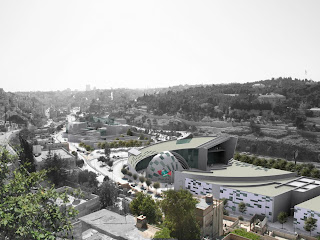 Building in the Business Center

My university, Jordan University of Science and Technology decided to change its website design again. The current design was first announced by the university's computer center in July 2007, I blogged about it and I suggested changes, some of them actually took place.

Things are even better this time, the university is asking students to vote for their preferred design. They presented three different templates and people can vote on the one it looks better in their opinion, voters are also asked to express their suggestions.

It is good to see that JUST realized that the website should be first accepted by its students as many complaints came about the user interface, cross-browser compatibility and lack of some functionalities. Asking users' feedback is always good and of course it will result in a better looking and more functional website.

If you want to vote: http://www.just.edu.jo/vote

The warnings come from Al-Arab Al-Yawm columnist Taher Adwan, who wrote yesterday about several Jordanian traditions that can be considered dangerous, especially now after the first two Swine Flu cases were found in Jordan.

The writer theorizes that Jordanians should stop some of their social traditions and activities in order to prevent spreading of Swine flu in Jordan.

The traditions "accused" by the article are:
1- Eating Mansaf by hands. Mansaf is the national dish of Jordan and is eaten exclusively by hand, but according to the writer this is the right time for Jordanians to stop.
2- Cheek kissing and hand shaking. In case of "necessity" hands should be cleaned with anti-germ soap.
3- Use of the same coffee cup. Coffee is probably the most important symbol of hospitality in Jordan, when served, it is put in a single tiny ceramic cup and offered to several guests, especially in important occasions like weddings and funerals. According to Adwan Jordanians should refuse drinking coffee in these situations.

I know that what the article asks for is widely acceptable in terms of hygiene and health, but are Jordanians ready to say good bye to their "bad" habits and accept this? I hope that.

Labels: Jordan, What's on the web

Jordanian Celebrations not so Jordanian

It seems that the organizer of the show in the stadium was a UAE-based company and the cameramen and TV crew were from Holland and France... So, does this mean we suffer from a shortage in skilled people?

At least, I suppose that the army men and 'Shabab Kulluna al Ordon' were Jordanians.

If you are interested, you can see full-length videos of the celebrations from the jordaynet Youtube channel.

For sure, Amman cannot be considered the world's most respectful city toward its architectural heritage. 1920's and 1930's old buildings in King Faisal street are demolished to be replaced by ugly concrete buildings and scary skyscrapers are scheduled to grow like mushrooms making Amman not the "white city" anymore.

Amman's inattention to its heritage and calls for modernization (or more exactly "Dubaization") are making us lose parts of old Amman, piece by piece.

What do you know about "Wadi Amman Project"?

We will not call it "Solidaire Amman" reassured mayor Omar Maani. But the 475,000 square meters project looks similar in principle; a multi-million regeneration plan for the downtown with a public-private partnership, it aims to "bring massive socio-economic benefits" to the area.

The project will comprise three main areas:
1) Wadi Philadelphia:
Includes the Roman Amphitheater, the Old municipality building (that will be rehabilitated into a hotel), the Poets house (Bait al Shi'r) that will remain the main cultural center with musical and cultural activities, and the old Raghadan terminal (converted into a commercial area with a public library and a hotel). Et oila: A funicular that connects the Amphitheatre with the Citadel (Area around 9 Hectares).
2) Wadi Raghdan:
Public gardens (Palace Gardens, since they are near the Royal Raghdan Palace). Mixed-use buildings (including a bazaar) and a pedestrian path. 22.5 hectares of "affordable housing", in addition to a Souq and a hotel.
3) Wadi al-Mahatta:
Intermodal terminal for the Amman-Zarqa light train.

The frontward yard of the Roman Theatre will be converted to a piazza, the Hashemite square will be revitalized with a beautiful landscape design. One of the main concepts of the project is to make Amman greener.

Good project, but will GAM take into consideration the local community in these areas? Will they try to conserve the old heritage and the old Ammani buildings? Not sure, one case is Abed Abu Mohaisen whose family produced traditional Bedouin daggers for more that one-hundred years has been asked to close down his workshop in downtown. A traditional Jordanian art may die out.

It is not clear which buildings GAM will reserve, even in the published pre-qualification document there are only three places which may be considered historical monuments and heritage buildings (Roman theatre, Old Municipal Hall building and the Poet’s House).

What do you know about "Hamzet Wasel"?

"Hamzet Wasel is an initiative by and for the citizens of Amman to encourage the diverse people of the city to build authentic relationships and exercise their social responsibility by designing and participating in activities and programs that tackle the complex challenges and explore the unique opportunities which exist within our multi-layered city."

In practice, Hamzet Wasel members protest the building of a wall around Jabal Qalaa and accuse the municipality and the Ministry of Tourism that this walls will prevent the citizens to access that part of the citadel which will be converted to a plaza for "people who can afford to rent the place" for weddings and parties.

Hamzet Wasel oppose the proposed demolition of the 50+ year old homes and suggest that the area remain open and free for all.

On the "Creative Jordan" website you can find rich and useful discussions. Dr. Khairieh Amr is an archaeologist who excavated at the same zone said there were plans to purchase an old house and convert it into a visitors center. She also asked why the government is building against its own regulations, if the people of Jabal Qalaa are under very strict regulations since the whole area is an archaeological site.

Sally Shalabi posted some photos of the wall and the bus terminal, it is not so beautiful.

Today a public meeting should be held with local community to discuss the issue. Fortunately the municipality is making some steps back and tries to be more cooperative with Jabal Qalaa citizens, urban architects and local community. Everybody wants a better and more attractive Amman. As we've seen, there are full of archaeological ruins at the citadel that wait to see the light, Amman's old buildings still keep centennial stories and should be reserved and the downtown hides an inestimable heritage that can be converted to a smart source of tourism and economy.

Everything can be accomplished by keeping citizen, local needs and heritage in mind.

Everything started last year, when a commission created by the Minister of Higher Education considered computer engineers unqualified to teach computer science. The decision was widely accepted by computer science departments and did not cause any resistance in most of the academic community, except for several computer engineering professors who found themselves unable to renew their contracts at the end of the academic year.

Yesterday, computer engineers protested again, but I am happy to read that the Ministry made things clear and dismissed the new claims against the decision.

Although most people do not know that, but there are relatively more differences than similarities in the two fields. Most of the computer science departments were first established from math departments, that is why computer science curricula contain a significant mathematical foundation and courses like algorithms, numerical analysis and theory of computation. It is not a coincidence that computer science is regarded as a natural science, like mathematics, physics and chemistry.

As the two subjects differ, it is very improbable that a computer engineer is able to teach a "pure" computer science course in a proper way. Even the common subjects, like operating systems, computer architecture and networking, are used to be taught by respective departments as the required approach may be different based on the target audience.

It is also known that computer engineers -generally- lack good programming skills and knowledge, that's basically caused by a smaller number of programming subjects in their curricula, in addition to the engineering focus on hardware rather than software.